Lordy, lordy, I love making soup. The other day I had two (two! 2!! DEUX!) days off. Everyone said that after the wildness of Valentine’s I should just go home and relax for a while, so I did. Maresa worked all by her lonesome for two whole days, and I came home and answered all my emails, mailed my tax papers off to the accountant, did my yoga, put some curtains Maresa gave me up in my office that I’d been meaning to put up for six months,

cleaned my entire house, mended a huge pile of clothes—and made soup.

Well, I got the “go home” part right, even if the “relax” part is too boring to me, anyway.

A quiet day all by myself, some food podcasts playing softly in the background but nothing, really nothing to turn off, and soup-making. Yes.

I made a clean-out-the-fridge soup, a Chinese kind of one, sorta. And I think I invented something, too. It’s all very exciting.

All I wanted to make was a simple dumpling soup. A light brothy thing. Some greens getting wilty in the fridge. Some tofu rapidly aging. Maybe some dumplings, stuffed with ground tempeh, a nod to the ground pork in Chinese dumplings, and lots of ginger and garlic and scallions—a burst of flavor in the middle of a calm soup. But when I went to make the dumpling dough, I realized I didn’t have a rolling pin at home. I have seven (yep) at work, but instead of

1) Rolling them out with a glass, or

I instead drove to the store to buy prepackaged dumpling wrappers. I’d promised myself I wouldn’t step a foot into the shop, and rolling dough out with a rolling pin substitute is really no fun. So, the store.

But there were no vegan dumpling wrappers at the store, so I called up Jacob, busy mixing some indie band in NYC, and talked about my day off and whined about how Things Weren’t Going Perfectly With A Plan That Wasn’t All That Important Anyway (a constant theme in my life). He suggested making dumplings with some rice paper wrappers hanging out in our pantry we use to make summer rolls in the summer. I told him that would never work, they’d dissolve in the soup too quickly and anyway, Chinese dumpling soup is made with wheat flour dumplings. I’m the cook in this family! His dumplings idea was ridiculous!

Soup plan on hold, I mopped all the floors in the house and mused on this ludicrous rice paper wrappers idea.

I decided to go for it with the rice paper dumplings. What a cross-cultural mix! Chinese soup with Thai rice paper wrappers? I’m not much of a fusion girl, really, and had wanted a more Chinatown-ish dumpling soup, but if the flavors work, they work, who cares about authenticity, right?

So I made my broth.

I had some dried galangal hanging around, that flowery, beautiful cousin of ginger that adds such depth to….ahh, to Thai food! So already my soup was fusioning itself, leaning more and more Thai. I put the woody rhizome into the pot, thinking wistfully of the gorgeous  young fresh-dug galangal that Jacob’s stepmother, Warunee, grows in her garden in Hawaii and is always giving to me, and added some thinly sliced ginger and garlic. I had some wild lime leaves (another Thai flavor!) in the freezer, and added some too. Eating Warunee’s wonderful Thai soups—fragrant with homegrown galangal, ginger, garlic, and lime leaves, on fire with hot homegrown chilies and tamed with coconut milk—had taught me that big chunks of flavorings you didn’t exactly want to chew on weren’t the worst thing in a soup, so I left the galangal in big huge slices and the lime leaves whole. They’d add the flavor to the soup then we’d take them out as we ate.

I added some kombu seaweed, which I add to every soup broth, no matter what ethnicity it happens to be, because of its umami depth and lusciousness. When I’m not making a Japanese soup where kombu seems appropriate, I take it out after the soup cooks but before we eat it, and then sometimes I chop it up and use it less like a broth base and more like a vegetable in the next soup i make. Italian-style soups, like minestrone and bread soups (real clean-out-the-fridgers, those), are nice with some chopped kombu, it melts right into the Lacinato kale I always seem to add. (And if anyone needs sea veggies I do, me with my cupcake-a-day diet and endless RSSC scrap noshing, and and and and…). Hmm. I’m more of a fusion cook then I want to believe, I guess. If it works, it works.

Back to my Chinese-Thai dumpling soup. I added some dried aricula, those tree ear mushrooms that come in impossibly compressed form and don’t taste like much but add some juiciness and a bit of depth.

Some scallions, too. I added some water—but not just water, pasta cooking water. Thanks to ten years working at Bloodroot, an intensely frugal, traditionally-minded restaurant (that just so happens to make the best soups in the universe), I never boil pasta or potatoes or any starchy thing at all, really, without saving the water. My mentor Selma‘s voice will call out to me–“DON’T WASTE THE POTATO WATER!” if I do. (She saves hers for rye bread and…oh my, that rye.) Even if I’m not making soup soon (which is rarely), I will boil tomorrow’s pasta in the pasta water of two days ago, convinced it adds untold flavor to the dish. Rice for breakfast cooked in potato water? Awesome. Anyway, it’s my little habit, I can’t stop now. Really this soup should have been more brothy, dumpling soup isn’t exactly thick, but I like a nice slightly viscous broth.

So I put my not-so-Chinese-by-the-minute soup with its broth made from two day old double pasta water on to boil, then to simmer.

Then I fried up some maitake mushrooms (organic maitake mushrooms at the health food store, what a world!) and added them to the soup with chopped dandelion greens, thinly sliced scallions, more shoyu, a bit of garlic vinegar (my homemade secret ingredient to everything—apple cider vinegar with green garlic steeped in it for a few months. We sell it at the shop!).

I loaded the dishwasher as I went, and smiled at how fun it was to cook at home—if my shoes were drying on the dish rack, no one need care or know. (It was muddy out the day before when I was modeling leggings, if you must know!)

I made my dumplings: rice flour wrappers with some ground tempeh fried in grape seed oil with a ton of chopped ginger, garlic, scallions, chile paste with garlic, and shoyu added and a little cornstarch to encourage it to all stick together. Just a bit of all that in each little package. Rolled them up.

Simple soups like this don’t need a long cooking time. By the time the dumplings were done, the soup was done. I stirred in some roasted sesame oil and added a bunch of dumplings to it and sat down to eat, while drinking tea and reading the newest Bust magazine. Day off stuff.

It was all brothy and clean-tasting, with these insane chewy dumplings right in the middle that exploded with rich wild flavor, a burst of fresh, barely-cooked garlic and ginger and allium deliciousness mixing with the fried tempeh and the rice paper wrappers—wow. 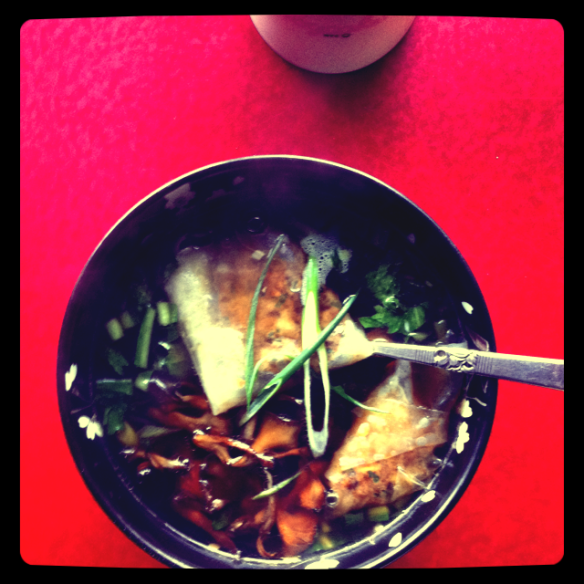 I said at the beginning of the post that I invented rice paper dumplings, but as you can see, Jacob invented them. But I made them, so I’ll take credit, too.

Day off soup. Sigh. Nothing better. 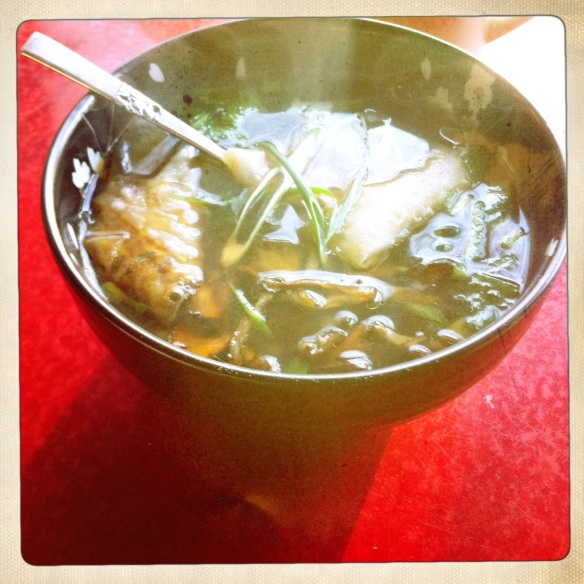 It’s a post-Valentine’s world in Lusciousland, and we’ve been using the wonderful calm to get reorganized and invent some new tasty treats. Here we go: 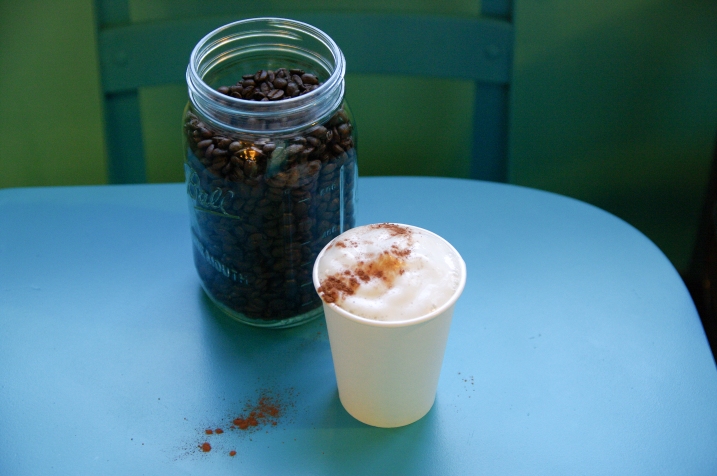 Caffè Cacao is our regular (insane, insane, insane) Drinking Chocolate with an ounce of beautifully crafted slow-drip coffee added! KAPOW! Topped with our almond and cashew whipped cream and garnished with cocoa powder, it’s a real eye-opener, on about a million different levels.

And also–I just announced a special discount code today which is only available to Facebook fans and Twitter followers. If you’re not already one or the other, or both, go join the club and get your discount code! We usually only do one sale a year, so now’s your chance!

Special discounts + more over in Facebookland!

Special discounts + more over in Facebookland! 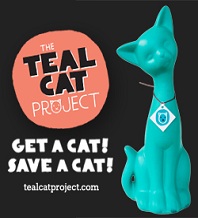 No Compromises: my business philosophy

How to make tempeh.

The Matthew Dickman poem about us.

A day at Bradley Farm.

About shuttering the meal delivery service.

My sous chef as Ellen Page in Hard Candy!

A pretty week of meals.

So many pretty weeks!

I mean, really, it's ridiculous.

Oh, summertime produce, you seductress, you.

What cooking is about.

Hey, I worked on a cookbook!