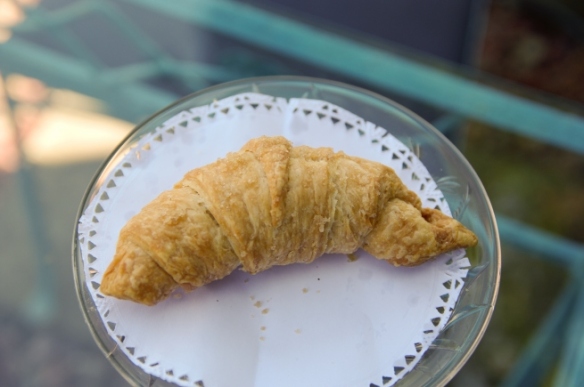 I’m really proud of our croissants.

They’re gorgeous, buttery to the max, and entirely vegan, yet not made with horrible artificial crap. The only ingredients are local organic flour, beautiful organic coconut butter, sea salt, organic coconut milk, a bit of organic sugar and a pinch of yeast.

I’m always thinking about how making chocolates epitomizes the idea that something can be “simple, but not easy.” That’s the croissants recipe to a tee. So simple, but it’ll take you five hours to make it. When I make them for the shop, I make 100 or so at a time, late at night while I watch movies and make Jacob hang out with me, then I freeze them and bake just a few a day, which sell out in the morning and then that’s it until tomorrow, because day-old croissants aren’t the perfect apex of ultimate perfection, so out they go. (We make Croissant Caramels with any leftovers at the end of the day!)

Around the holidays last December, I just couldn’t cut it anymore. My late nights were spent making chocolates for the flood of orders, and something had to give. So no croissants for a while. Then I went on vacation. When I came back I made a batch, but my heart wasn’t in it. I didn’t incorporate the coconut oil into the batter efficiently enough, and it all leaked out when they were baking. I had a feeling the batch wasn’t going well, but I was tired and didn’t want to do another “turn” (folding the dough like an envelope and rolling it out into a thin sheet is called a “turn.” My recipe has four of ’em.) so I just went with it and they were not fit for eating and were barely fit for grinding into crumbs for Croissant Caramels. When you make a recipe that potentially brings in $300 (100 croissants x $3 each), ruining it pretty much ruins your day. But it happens, and I was gentle on myself and decided to just not make croissants again until after the next crazy time, Valentine’s.

You might have noticed that it’s now mid-March and no croissants have been forthcoming.

I’m trying to find ways to make the shop (which I love) compatible with not working 100 hours a week (which I do not love), and it seems that somehow croissants just aren’t compatible with that goal. The other thing about croissants is that in order to make them as fluffy as possible the coconut oil needs to be as cold as possible, which means that rolling it out is a major workout for your wrists—rock hard fat on top of cold dough. Can I say it again: not easy.

Unless, that is, I buy something called a dough sheeter. A dough sheeter is basically a giant pasta machine, the kind you might have gathering dust in your garage that you always mean to break out to make some homemade ravioli but never really do (I have 3. Sigh.). When I buy a sheeter, we’ll be croissantizing up a storm, because the dreaded rolling step is taken out of the equation—the dough just magically passes through the sheeter four times and presto, done!

And here’s where I get grumpy about being a small business owner, particularly a vegan one. There seems to be this trend in the vegan world of for-profit businesses asking for donations in order to start up or stay in business. This infuriates me. I know the money donated to these donut shops or bakeries who want to buy an espresso machine (yep) comes from well-meaning animal advocates, which means it’s not going to wonderful animal charities who desperately need the money. Not that small businesses don’t need money—hoooo boy, they do. We do. But (and I know I’m making myself sound really high and mighty here, and it’s probably because I feel really really really high and mighty about this) no matter how much I want a dough sheeter (and no matter how much you might want croissants!), I couldn’t live with myself if I put up a Kickstarter.com campaign to get my pals and customers to “donate” to the “cause” of me making money.

We’re still slowly doing renovations on the building the shop is in (stay tuned for a fun announcement, around next month or so!), we still have to pull off all the ugly siding on the outside of the building, spring is coming and I really want to buy a cool bike rack and some beautiful landscaping outside the shop, quarterly sales tax is due—it’s going to be a while until that sheeter enters my life. But that’s just the way it goes.

And that’s the story—a bittersweet one, you could say—of why we don’t have croissants right now. 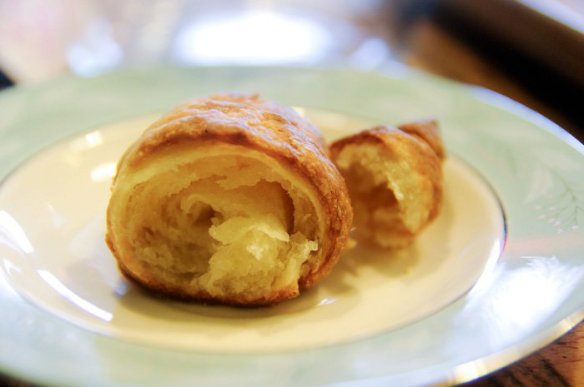